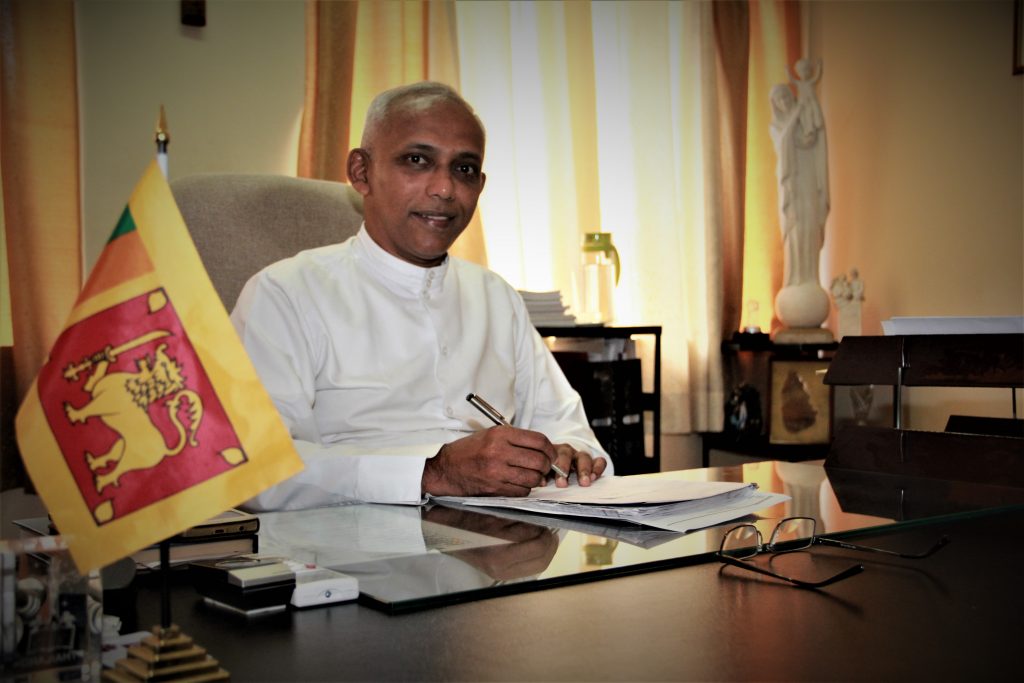 ‘’ As SEDEC family, we warmly welcome you into the Social Arm of the Catholic Church of Sri Lanka, while wishing you God’s Blessings and sincere congratulations for the Silver Jubilee of your Priestly Ordination.’’Ad Multos Annos!

The Staff of Caritas Sri Lanka – SEDEC  celebrated  Holy Mass  on July 25, 2017  in praising  the Lord  on the occasion of the 25th  Priestly Ordination Anniversary of Rev.Fr. Mahendra Gunatilleke, the National Director of Caritas Sri Lanka. Rev. Fr. Camillus Fernando & Rev. Fr. Desmond Perera who also celebrate this milestone in their Priestly vocations, were joined by the Directors of Caritas Network Fr.Anton Wyman Croos, Fr. Jamika Perera, Fr. Shriyan Fernando and Fr. Srilal Fernando in the celebration  of the Holy Eucharist. Fr. Camillus delivering the sermon said, that every priest should live their life simple while adhering to the true virtues of priestly life such as being loyal and obedient to the call of the Lord. He further emphasized on the importance of possessing the feeling and sense of divine security and protection before proving others the same. He also praised Fr.Mahendra as a man of learning, reading and innovation where ever he was called to serve in his Priestly vocation.Fr. Mahendra was ordained a priest in 1992 and had served in parishes of Dalugama, Kotte, Kimbulapitiya, Ratmalana, Kadana and Nayakakanda. In addition he was a member of the St. Aloysius Seminary for a period of 5 years and had served as the Chaplain for the Catholic inmates at the Welikada Prison during 1995-2001.  He is the founder of the Christu Sevana, Home for the Elders and is the brainchild behind NIC (Neighbors in Christ) and YCFF (Young Christian Family Fellowship) societies.He obtained B. Phil and B.Th degrees from the National Seminary of Our Lady of Lanka, Kandy and also holds a postgraduate degree from the University of Kelaniya in Sociology.

Fr. Mahendra, who is from the Colombo Diocese, was the former Director of the Colombo Catholic Press and the Editor of the Messenger, assumed duties as the new National Director for Caritas Sri Lanka – SEDEC on 4th of May 2017.

He is a  past pupil of St. Joseph’s College, Colombo.