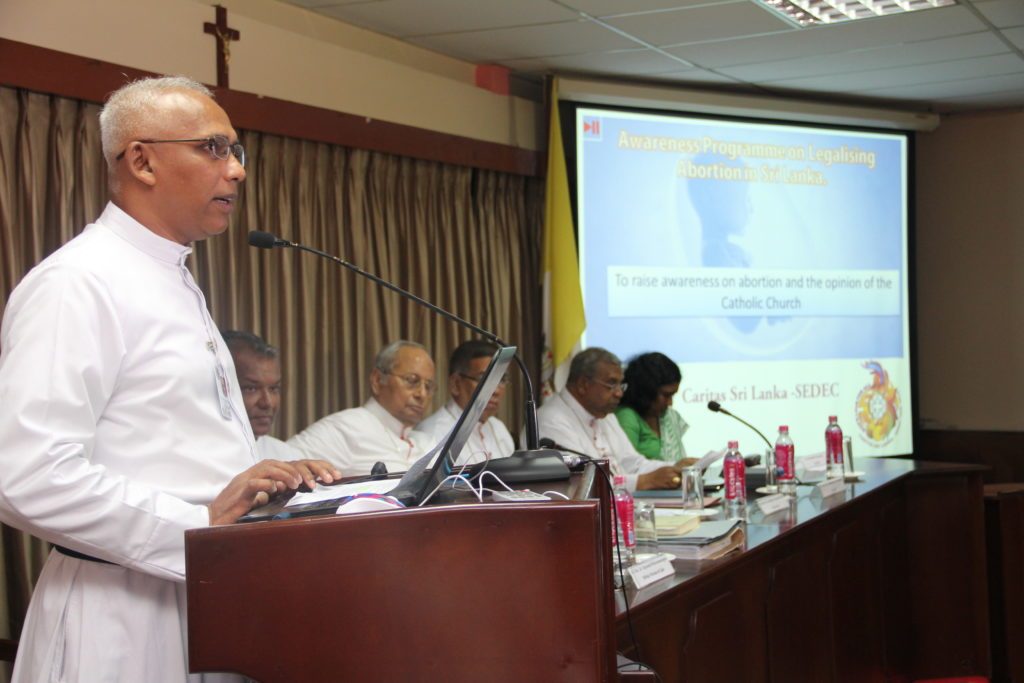 Caritas Sri Lanka-SEDEC organized an awareness programme on 23rd of April 2018, against the government’s attempts to bring amendments to the present bill on abortion. The programme was organized under the leadership of His Eminence Malcolm Cardinal Ranjith, participated by several Bishops, Heads of Congregations, priests and nuns, medical practitioners and activists to discuss possible ways to oppose and present alternatives to the proposed legalization. The stance of the Catholic Church is that the church vehemently condemns abortions under any reasons or circumstances.

Welcoming the participants, Rev.Fr. Mahendra Gunatillekee emphasized the impending dangers if abortion is legalized in Sri Lanka. He added that the church is in the strongest view of opposing the legalization of abortion and if we are united in our opinion together with Catholic Doctors’ Guild, the Church could send a strong message to the communities.

The chairperson of the event, Rt. Rev. Dr. Norbert  Andradi OMI, Consultant on moral theology and Canon Law sharing his views stated Christianity is about receiving life and safeguarding it, letting it grow and allowing it to bear fruit for oneself and for others. He also touched aspects pertaining to the science of death.

Rt. Rev. Dr. Emmanuel Fernando, the Bishop of Mannar, described the viewpoint of the church using Bible references and Papal pronouncements. He specifically mentioned about the moral evil of the abortion and value of the human person. He said that the Catholic Church affirms that human person is endowed with a spiritual and immortal soul, and is “the only creature on earth that God has willed for its own sake.’ (Catechism of the Catholic Church 1703).

According to the Didache 2.2, the first century document of the Teachings of the Twelve Apostles, you shall not kill the fetus by abortion or destroy the infant already born. He also reminded of the movie, ‘Silent Scream’ narrated by Dr. Bernard Nathanson who performed 75000 abortions, and later turned a staunch anti-abortion campaigner.

Dr. Maxi Fernando, past president of the Catholic Doctors’ Guild narrated scientific facts, and talked about on the lines, ‘The views of doctors and their colleagues; past and the current’ with the aid of a powerful presentation.

As per statistics, there are 355,000 births in a year and 365,000 abortions take place exceeding the number of births. Complications and psychological effects of abortion are another concern which need more attention and consideration. Results of a survey shows that 70% of the Catholic doctors said ‘Yes’ for abortion while only 30% said ‘No’. Dr. Maxi says, a few Catholic doctors are also involved in criminal abortions. In conclusion, Dr. Maxi said that we should speak against abortion at various professional and casual forums and workplaces especially, to discourage Catholics who support abortion.

Later a short film was screened with a narration of a letter written by an aborted baby to his mother 17 years later.

Dr. Romanie Fernando speaking on the topic, ‘A Catholic Gynecologist view on abortion’ referred to various scriptures concerning birth and Termination of Pregnancy (TOP), the present day term for abortion. She explained the moral obligation as a Christian and the diagnosis of pregnancy and prevalence of genetic defects.

His Eminence, Malcolm Cardinal Ranjith opened the forum for discussion by commenting about a news article published recently regarding adoption of dogs. He suggested adopting children instead of dogs referring to the Christian values and obligations towards the sustenance of human life. His Eminence insisted that Catholics cannot go any other way rather than objecting abortion. Referring to Pope Francis’ stance on abortion His Eminence said no church leader can condone abortion. Parish priests should take more responsibility and preach about abortion in their sermons, he said.